A few years back a man who’s most famous quote is “There are no two finer words in the English language than ‘encased meats,’ my friend” retired early.  He sold hot dogs and then closed up his famous restaurant and retired early.  Doug Sohn owner of Hot Doug’s retired early.  Let that sink in.  Hot Doug retired. 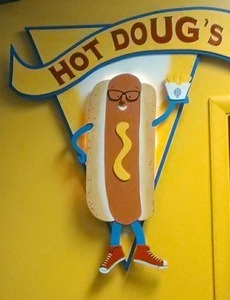 For those who do not live in Chicago or did not make your way out of the museums, downtown area, or lake front on your last Chicago vacation may have missed out on one of the truly great food experiences Chicago has to offer.

Hot Doug’s The Sausage Superstore and Encased Meat Emporium offered some of and if not the best hot dog’s and sausages in Chicago.  It’s probably safe to say in the world.

Like anything great expected in life you must wait. If you have ever been to Hot Doug’s it was not rare to wait in line for 30 minutes and sometimes even 2 hours(since the announcement of his closing the lines have doubled and tripled).  You will not have to worry about waiting in line any more because Hot Doug retired.

Sell Hot Dog’s and Retire Early Everyone is Doing It 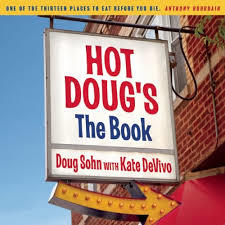 I’m on the verge of buying a hot dog book!

You read that right, the guy selling hot dogs and sausages is retiring early, he officially closed up shop on October 3rd 2014.  Although I’m sure he still receives some money from his book.

I happened to be searching around the Mr. Money Mustache forum, mostly because I was curious what was Mustachianism Around the Web and came across this Hot Doug retired mention.

This led me to a Chicago Tribune Article and interview about the man himself.  I’m going to highlight the financial questions and answers and any talk about retiring early and get into it.  I mean Hot Dog, I’m excited! To corn dog for you?

An Interview with Doug Sohn aka Hot Doug

Q: The most frequent comment I’ve seen on social media regarding your closure is, “People are waiting six hours-plus for a hot dog? They’re crazy.” Are people crazy?

A: No. People spend $60,000 for a car. I think that’s insane, when I have a 1995 Toyota Corolla that gets me where I want to go. I mean, it’s not like they’re waiting in your living room. If you don’t want to wait for hot dogs, I’m not sending you a summons. Are people crazy to spend $500 on a meal? Someone binge watching “The Good Wife” for six hours is a good thing, but waiting for food isn’t? I don’t judge.

Even Steven Money(ESM):  Like the Millionaire Next Door we have found out that those who are millionaires or in this case ready to retire are driving around older vehicles not the $60,000 sports car.  Instead are driving around a car from 20 years ago because it simply doesn’t make financial sense to do anything else. I bet Hot Doug paid off his car fast! He goes on to mention the over consumption that most of America does on a daily basis:  eating out at fancy restaurants and watching way too much TV. The hidden message in all of this is go ahead wait in line, it’s free to do so and probably better than what most people are doing while you stand in line for some hot dogs.

Q: You wouldn’t close up shop if you’re not financially set, right?

A: I don’t live above my means. I’ve always put money away.

ESM:  Don’t try to keep up with the Joneses, instead put that money in savings, you never know when you are going to want to retire.

Q: Someone once offered you seven figures to franchise the restaurant. That would be hard for most people to turn down.

A: Any decision I’ve made that was purely for the money, I’ve always regretted.

ESM:  Spoken from experience it sounds like, which I find interesting as I start to use affiliate links and market items that I use and believe in, like Republic Wireless.

A: My grandfather said if you make $100 and you spend $101, you’re in trouble. You know, I remember reading this interview once with the president of Sony from 30 years ago. They were asking about the Walkman and how much market research was done. He said, “We didn’t do market research. We created this product, made it at the right price and told people they need it.” People would say, “You sell sausages?” “Yeah, but we sell good sausages.”

ESM:  It sounds so simple but it’s a topic money experts and your grandfather talk about as one of their commandments, don’t spend more than you earn.  He talks a little about his business strategy, which really says if you are going to sell anything or provide a service make sure it’s a good product that people will need and like, once again sounds simple right?

Q: What would you have told your 22-year-old self?

A: I don’t know. And this is where studying philosophy in college helped: I wouldn’t be here if it weren’t for all the decisions, good or bad, some that worked out and some didn’t, all of which that lead to this point. I’m very content now. There were no wrong decisions. There were decisions. I get the “what will you do next” question a lot, and honestly I don’t know. That’s exciting. I have the luxury of not having kids who have to go to college or need braces.

ESM:  This really explains why I am passionate about money and personal finance.  I have made good and bad decisions.  These decisions have lead me to where I am today and that’s on my way to financial independence.  If things had gone differently maybe I would be selling financial products in Miami, trying to drive that expensive car and buy that big house, no matter what the cost.

Q: Visiting Hot Doug’s before it closes is on the bucket list of a lot of people.

A: It’s flattering. But the idea of a bucket list makes no sense to me. Because you’re trying to accomplish something purely for the sake of accomplishing it. The goal is to the journey. Some of my greatest memories are things that happened that I didn’t set out to do. “Oh, this restaurant is close, so we detoured here instead and that was extraordinary.”

ESM:  The goal is the journey.  This is one of my fears that I look to avoid on my path to FI.

A: No, no. From the restaurant business? Yes.

ESM:  When I sat down with Mr. 1500 days, this was something we specifically talked about.  Would we retire from our day to day jobs? Yes. We talked about a cool beer finding app and traveling to golf with my Dad for a month.  Also how I wanted to play “bring your friend to work day” with one of my best friends growing up, but eventually work on something we care about and have a passion for.

Q: When will you get back to work?

A: I can’t imagine anything happening until spring. I want to travel a bit. In October I’ll be renting an RV for two weeks with my girlfriend — we’re heading down the bourbon trail in Kentucky, the Carolinas, Nashville and Dollywood, because you’re obligated to visit Dollywood if you rent an RV.

ESM:  I would do almost exactly what Doug has plans for.  I’d want to take a little break, kind of let things sink in.  Then I’d like to get out and travel.  Go to places I would love to see, maybe a nice West Coast drive, backpack parts of Europe, or I hear Canada is nice this time of year!

Q: What’s your next job going to be?

A: I’ve got a bunch of ideas. I get the feeling it’ll be multiple things. The two things I do know: It won’t be a restaurant and it won’t be a food truck. I’d like to gear toward giving back in some capacity, maybe a charity or non-profit.

ESM:  Is this what everyone wants to do?  Nobody wants to do the same job, but if they can help and make a difference with their new found time and energy it would be a beautiful way to live, don’t you agree? 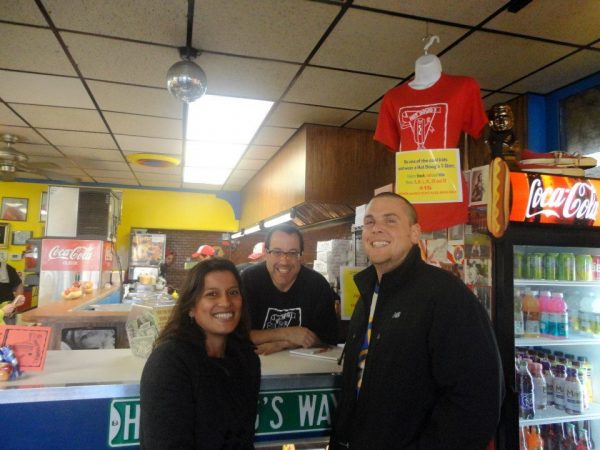 I wrote this article back in the early days of Even Steven Money when I was paying off debt, selling my fancy cars I should not have bought, and figuring out life.

Since then a lot has changed with me, but it’s interesting to look at what has changed for Doug.  One of the first things I remember is that Doug ended up getting his own stand out in the famous Wrigley Field bleachers.

It looks like the need for more encased meats expanded as according to his website you can buy some of his product via Peapod grocery, Piece Pizza, his own inspired beef jerky, merchandise, and even a movie.  Like many that retire from one job or endeavor they end up doing things that they enjoy without the need to show up in the office or behind the counter every day.

If you are interested in reading more about Doug Sohn aka Hot Doug and how his doing in retirement, check out his website.

This article was featured on Rockstar Finance when my main man J Money from Budgets are Sexy was running the show.

How to Become a Millionaire Next Door

What Financial Freedom Means to You