Michael Jordan A Legend On and Off the Court

I grew up playing basketball my whole life and for me, Michael Jordan is the greatest basketball player of all time. He won 6 NBA championships with the Chicago Bulls. 5 MVP awards. 10 Scoring titles. Far too many awards and accolades to even list.

Michael Jordan is not only known on the court, but off the court as well.  He has a number of businesses including the Jordan Brand with Nike, Michael Jordan’ Steakhouse, and even becoming the majority owner of the Charlotte Hornets.

The man has made millions on and off the court and now is a billionaire; so to say something can be learned from his financial and life successes from the great Michael Jordan I think would be an understatement.

You are all probably wondering if I ever really worked for Michael Jordan? I am not some big executive at Nike, what’s really going on here?

As some of you may know Michael Jordan is an avid golfer and a member at many golf courses across the country including a few in the Chicago area. During college every summer I worked as a caddie at one of those golf courses.

If you have ever seen the classic movie Caddyshack you know a little bit about being a caddie.

For those of you who have not seen one of the greatest golf movies of all time, a caddie essentially carries the golf bag for the golfer.  The good ones are known to give reads on the green and become their personal psychologist.

As you become more experienced and have been around the golf course and the golfer you give advice on yardage, club selection, local knowledge about the course itself, and in some cases even as a psychologist when things go wrong.

The golf course I worked at is expensive to join and considered one of the better private golf courses in the Chicagoland area. Because of this, you will find many successful business owners, CEO’s, lawyers, and executives as members. I have had the privilege to be around some of the richest men in Chicago while working on my tan and saving up to pay for my college tuition.

I was even able to score Oakley sunglasses at cost, win my Ping golf bag, and purchase the golf clubs I plan on having for the rest of my life.

Throughout my college summers, I have seen MJ, his well-known nickname, pull up and hit the links a couple dozen times.  However, to be able to caddie for Michael Jordan you have to pay your dues, show up every day, and get a little lucky.  It’s my Michael Jordan golf story a little bit of luck has to be involved.

I mentioned seeing MJ a couple dozen times, but just because he came to the golf course did not mean I was up next to work as his caddie.

Certainly, I was jealous to hear another caddie go out there with the greatest NBA player of all-time, but I knew that my opportunity would come.

This is not a job where you show up 1 day a week and tell the boss or caddie master, I love that title, let me know if MJ shows up today and I’ll take his bag. Show up every day, work very hard, know the course well, and wait your turn.  Well, that big day finally came.

I was first on the list because I hustled in at 5:45 am to do so, not your typical college kid summer of hanging out at the pool or waking up at noon due to a night of partying.

My boss let me know that I would be caddying for Michael Jordan that morning as he was scheduled to be on the books. It would be me and another caddie since Jordan likes to race around the golf course usually playing 36 holes.

Since there would be 2 of us, I would be splitting any tips or money that came my way, but I didn’t really care, it was Michael Jordan!

I was pumped and a little nervous at the same time. I mean this guy hits game-winning jump shots for breakfast.

We were called up to the pro shop as Jordan had arrived and like usual he had an entourage of people. From everything that I heard that day, the entourage were his friends from Atlanta.

I assumed they were either his golf buddies, old friends from growing up, or guys he works with, but honestly, I wasn’t very focused on his friends.

I was in awe of the world famous #23, Michael Jordan. 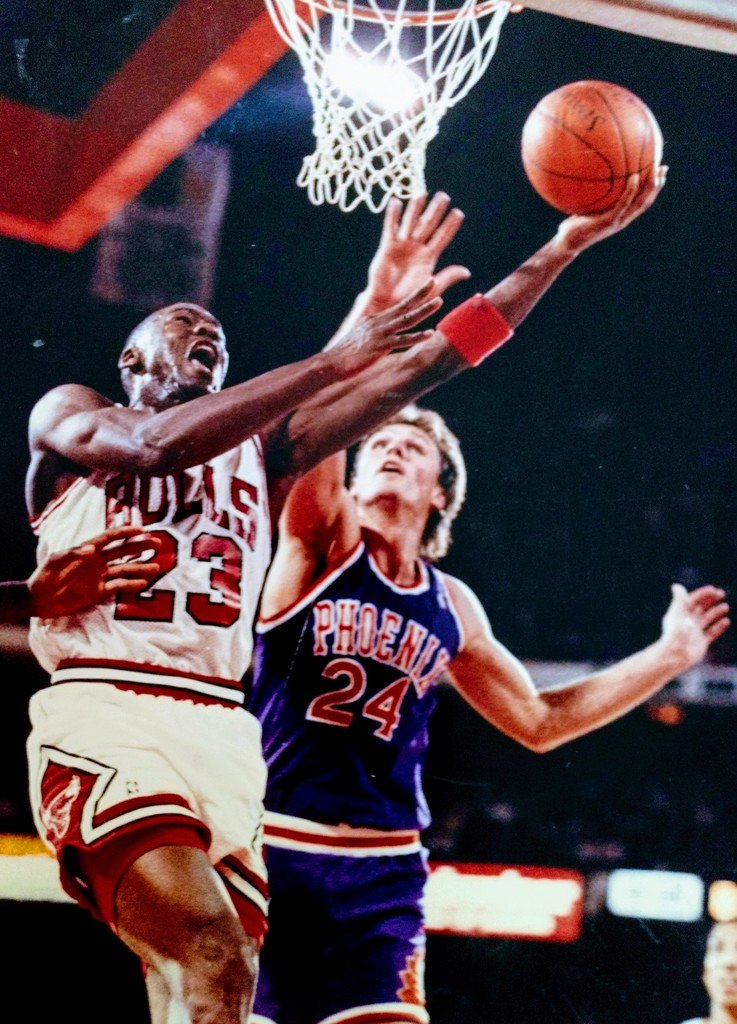 Standing on the tee warming up, he looked every bit of his 6’6″ recorded height.  I stood there and took in every single moment.

They could have been talking about political science, making millions, or just about anything because I was memorized.

I didn’t think this would really happen. I was working for Michael Jordan!

I wasn’t sure if Jordan was messing around with these guys or what.  Jordan had been talking trash the whole time on the tee box.  Maybe this was Jordan attempting to own some real estate in their head space.

Our group went off from the first golf hole.  I was acting as a fore-caddie.  A fore-caddie is where you don’t carry the bag but rather go out in front to spot the ball, give yardage, grab clubs, etc.

One of the highlights for me was being able to wash the golf ball when MJ tosses it your way. I technically was playing catch with Michael Jordan for 36 holes!

The first 2 holes nobody said a word until finally, someone sank a birdie and Jordan started laughing. In between laughter, he said, “I was worried nobody was going to talk the whole round”.

I don’t know if this is one of the “These are the best Michael Jordan golf stories we’ve ever heard” but it’s certainly mine.

Jordan took this bet seriously just like he did when he was on the basketball court. He has many other ventures where success has followed along the way, included in his billionaire status.

What a great day at the golf course, I couldn’t have imagined it any better.  I was running around the course watching Michael Jordan hit the ball a mile.  All the while getting paid for my efforts. At this point, Jordan had already gone through a full 18 holes and almost halfway through our 2nd round.  He had not asked any of us for advice including his short game on the green. He knew the greens and from what I had seen to this point is a very good putter.

Then it came, the moment I was preparing for. Jordan asked me for advice on one of his putts.

This was my big moment.  I gave him my advice on this putt.  This was 26 holes in, so I had been waiting for my opportunity.

I was ready. During the course of the day, I had been looking over many of his putts to see if he needed help.  My strategy was to see where I would hit certain putts just in case he asked.

I gave him my advice on where to hit the putt.  I would love to say he made the putt.  A special moment occurred where we high-fived.  I took a running start and did a chest bump.  Which was then followed up by buying me a Gatorade.  Unfortunately none of that happened. 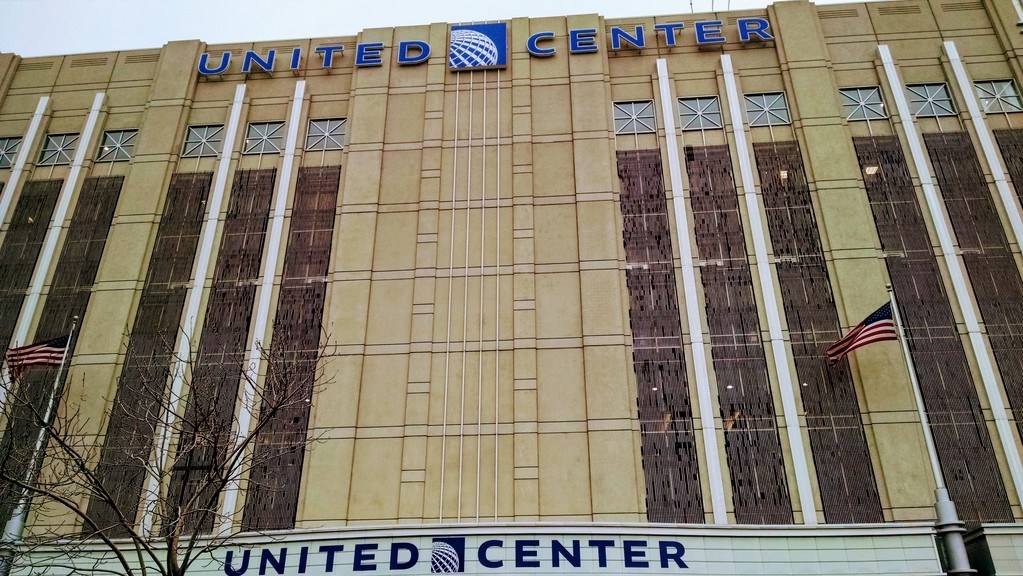 The house that Michael Jordan built

He missed the putt and immediately one of the guys asked: “Did he give the right read”?

Jordan could have blamed me.  I mean I was just some college kid running around with a big grin on his face for the past 4 hours, pretty easy target.

Jordan didn’t flinch, he said no it was on him, he missed the putt.

I was relieved. I’m glad I didn’t have to shed any tears since those would have been the results had he blamed me. Instead, he took full responsibility.

While the missed putt didn’t cost MJ $10,000, I certainly felt the weight of 10,000 pounds of relief being lifted off my chest as he took responsibility.

Whatever Your Situation is, Always be Ready

I cannot remember one time during Jordan’s career when during an interview he said the blame is on Scottie Pippen for not making a shot.  He didn’t blame Phil Jackson for not coaching better that game, he always took responsibility.

There is a point during the round when you know you are done.  It’s like when you are at work and you hear the whistle bell blow, it’s time.

My day at work was nearing the last few holes.  I was ready to get paid by my childhood idol for a day of running around the golf course with a big grin on my face.

Let’s just say I had a jump in my step on my way to the next hole.

Then it happened. I watched every single golf ball off the tee.  Like many before I watched Jordan hit the ball a mile into the clear blue sky.

In this case, there was a hill.  The ball went right over the hill and in a blind spot from where I was watching.  Now despite the 100’s of golf balls that have gone over that same corner, the golf ball disappeared.

I’m talking disappeared like a squirrel hides his nuts for the winter.  I’m convinced this squirrel grabbed the golf ball and took it into his tree for his collection.  What other reason would he want a  Jumpman logo souvenir golf ball?

I was scared to death.  I was blowing it right there.  We must have looked for what felt like 30 minutes and absolutely nothing.  I can’t imagine whatever happened to that golf ball.

The ball was lost. Be that as it may, I didn’t start blaming the sun for blocking my view.  Instead I took responsibility and did the best I could in the situation at hand.

Here I was on the easy ride to get home, something in me relaxed a little.

I may have thought I was paying close attention to my surroundings, but I failed the test. The truth is if this were the 1st or 2nd hole I would have had such a laser focus I would not have lost the ball.

I was probably thinking about the pay-day or the great memory of my day caddying for Michael Jordan.

It’s easy to start coasting in your professional life, side business, and even blog. Don’t relax, make sure you are still using that laser focus.

36 holes were complete and the only thing left was to get paid from the man himself. A day with Michael Jordan and getting paid for it, what an unbelievable feeling.

Now not surprisingly my actual name is Steven, hence Even Steven Money.  A few people use my last name or some variation of it.  Only my Grandfather and Michael Jordan have ever called me “Stevie” without objection.

Jordan called me over “Hey Stevie I got something for you”.  I walked over and Jordan said “Stevie thanks for doing a great job today”.  Jordan stuck out his enormous hands and gave me money for my day of hard work with the greatest basketball player of all time.

It was a fitting close to a unique day.  My Michael Jordan golf story is one that I have enjoyed telling and I hope you have enjoyed reading.

I doubt Michael Jordan will ever read this.  If he ever does, I want to say thank you for one of the best days of my working life.  Let’s do it again sometime!

This article was featured on Rockstarfinance.com

Please log in again. The login page will open in a new tab. After logging in you can close it and return to this page.