5 Takeaways from 2020 Berkshire Hathaway with Warren Buffett plus Video

Just this past weekend I watched Warren Buffett and the Berkshire Hathaway annual meeting like a Super Bowl party minus the commercials.  I was ready for the long haul of watching Warren Buffett and Greg Abel rather than fan favorite Charlie Munger talk about stocks, US economy, and overfill of investing wisdom.  A quick nap, bottle of Coca-Cola, gummy worms both sour and organic, along with a few extra chocolate pretzels and today I’m ready to share my Warren Buffett takeaways from the 2020 Berkshire Hathaway annual conference.

Warren Buffett started out by giving us a financial history lesson.  Lessons from the Great Depression.  The Louisiana purchase.  Plus many other historical and financial lessons along the way.

While Buffett talked and talked during his presentation with supplement slides for the first time in his illustrious career as a presenter to many, the main point was simple. 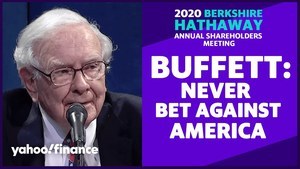 Wait You Sold All the Airlines

One of the first big disclosures came early on as a question was asked if Berkshire Hathaway had sold the company’s airlines stock.  Berkshire Hathaway owned the four (4) largest airlines in the United States.  This included America Airlines, Delta, Southwest, and United.

This is something he usually does not disclose during annual meetings, but this time around he surprised me and maybe all of us.

I knew from recent headlines that Buffett had already sold some of his newly acquired Delta and Southwest airlines stock in early April.  However I was pretty taken back by Buffett selling ALL of his airlines stock.

This news was especially surprising to me because Warren Buffett is known as the classic buy and hold investor.  Buffett is even quoted as saying “Our favorite holding period is forever”.  In this case the airlines did not fit as one of his favorite holdings.

Not surprisingly these companies along with other airline dependent publicly traded companies were hit especially hard after these remarks in the days to come.

Warren Buffett: Why we sold our entire stakes in American, Delta, Southwest, and United Airlines

Pay off your credit card debt, even Buffett can’t beat that investment

During the Q & A Buffett shared a story about a friend who was looking for investment advice.  His friend informed Buffett that she had come into some money.  Buffett asked if she owed money on her credit card?  She let Buffett know that she indeed owed money at an interest rate of 18%.

He advised her to pay off her credit card debt.  He explained that this advice would be way better than any investment idea of his.  During the Berkshire Hathaway Annual Meeting  shared that she didn’t like that answer much.

I’ve mentioned it before but for a very long time I was scared to death of credit cards.  But I’ve seen it time and time again as a financial coach.  Individuals will have credit card debt and continue investing, regardless of the high interest debt. 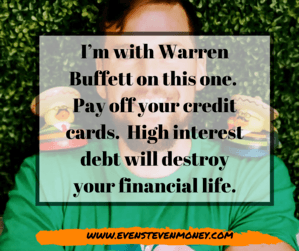 Warren Buffett: People should avoid using credit cards as a piggy bank to be raided

I’ve got 137 Billion Problems and Cash Ain’t One

Berkshire Hathaway has 137 Billion sitting in cash.  Good problems to have.  Buffett said that he didn’t think that this position was that large when he looks at worse case possibilities.

I could see the wheels turning.  Buffett explained that in the insurance business a hurricane is certainly possible even probable throughout the year.  But just as possible is an earthquake occurring at the same time.  Covid-19, shutdown of the economy, unemployment.  What will be next?  More economical difficulties?  A strong recovery?  It’s difficult to foresee what’s next especially after such a short period of time.

Warren Buffett appears to be in a wait and see approach as he approaches the potential fallout from the economy shutting down during Covid-19 and I can’t say I blame him.

Warren Buffett: If you can’t handle fear you shouldn’t own stocks

I Miss You Charlie 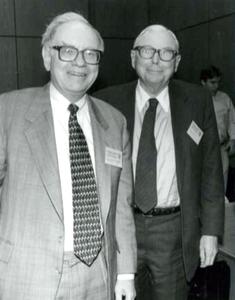 During the opening remarks you could hear the sadness in Buffet’s voice as he announced Charlie Munger would be watching from home.  Buffett’s business partner and close personal friend for the last 60 years would not be sharing the stage with him this year despite his fine health at 96 years of age.

My takeaway was that while the Berkshire Hathaway annual conference wasn’t the same without Charlie Munger.  Many of the usual thrills of the Woodstock for Capitalists were missed by many.  Warren Buffett promised next year will be back to the fun had my many in years past.

I hope to there live and in person to share my Warren Buffett takeaways from the 2021 Berkshire Hathaway annual conference.

I expect Warren to be drinking too many Coca-Cola’s, constantly snacking on See’s candies peanut brittle, and Charlie Munger close by his side with nothing to add.

Invest in Index Funds and Gamble a Little